Sorry to put this up on the blog but I'm hoping for a quick answer. I'm trying to import my 2000 or so records into Mapmate via a tab deliniated file.

If I try and put in a record the normal single entry way it's telling me the determiners I'm putting in are new - basically there doesn't seem to be any names in the list apart from me - surely the likes of the people on this blog are already on the system? The alternative seems to be to put you in as recorders - which it may not take without your locations.

I must be missing something?
Posted by Mark Griffiths at 19:41 4 comments:

Maybe this further pic will help. This time it was on Cherry and seems almost identical to the one on the Apples. 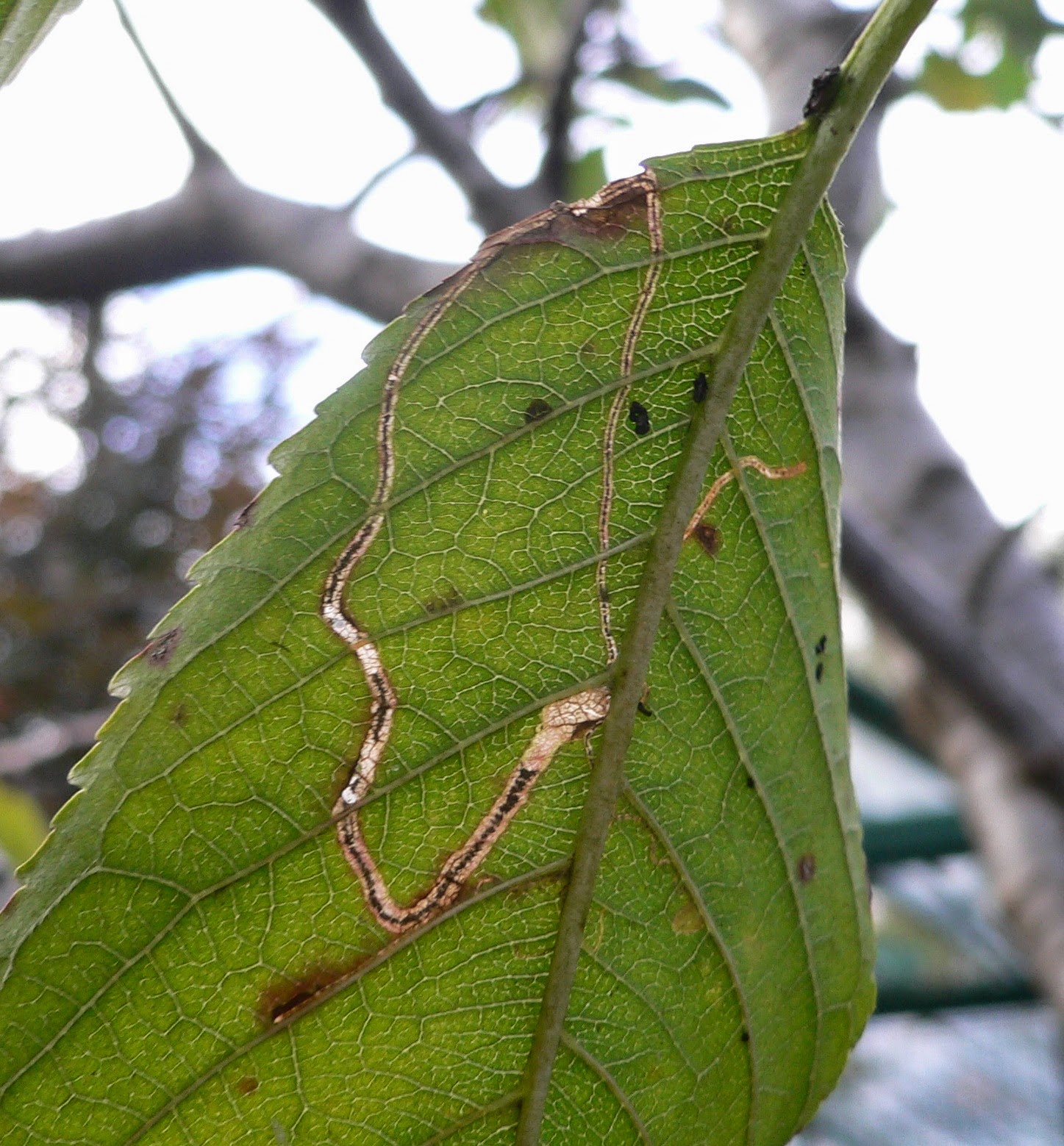 A Happy Christmas all!

Nothing in the trap for weeks so I'm reheating some leftovers - I attempted to take some pictures back in October - had a look over the UK leafminer site, put it to one side and then had a look today.

I've made some tentative IDs, can someone confirm?

I think I have

Lyonetia clerkella (apple) - also seems to be on the Cherry. 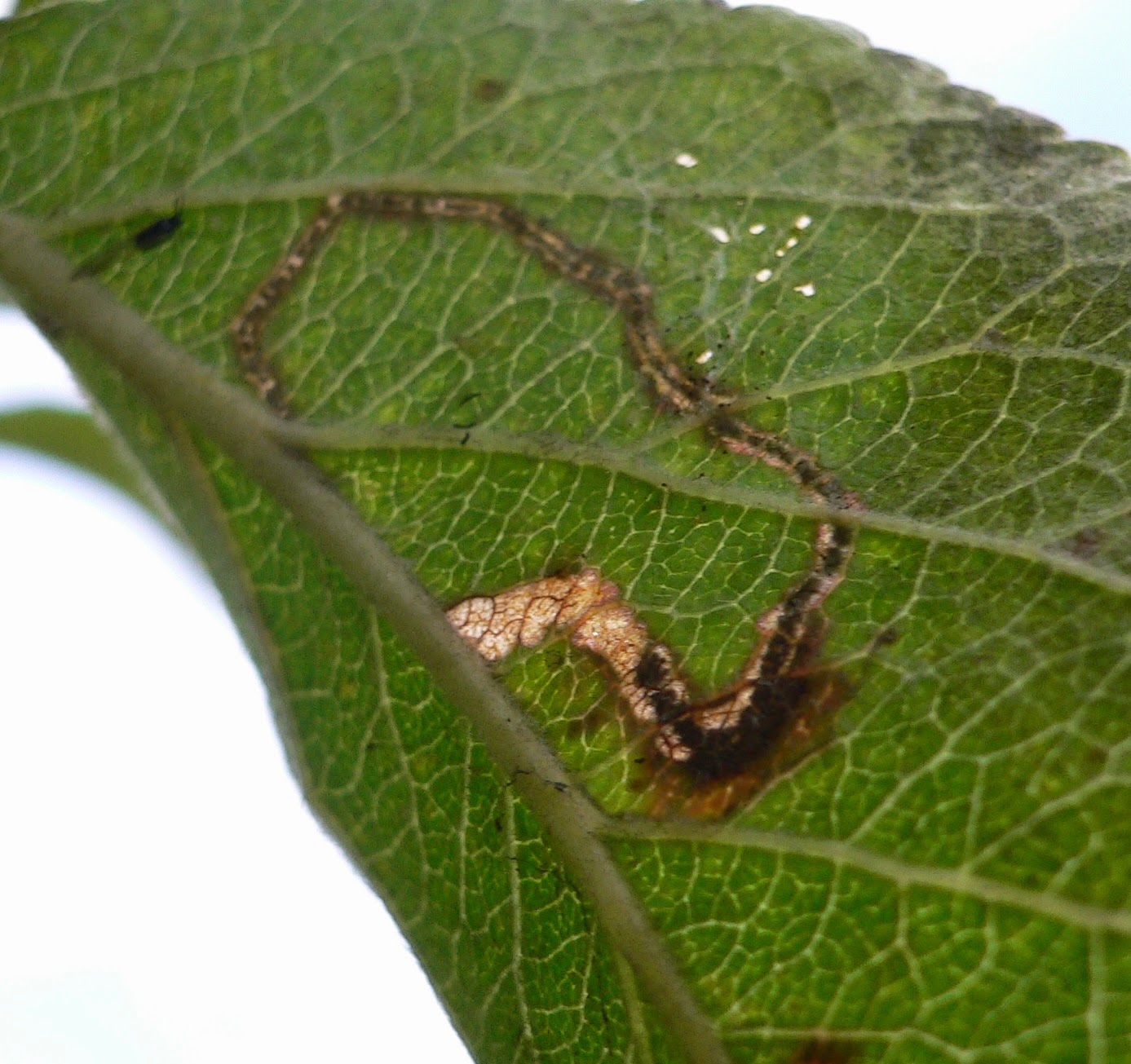 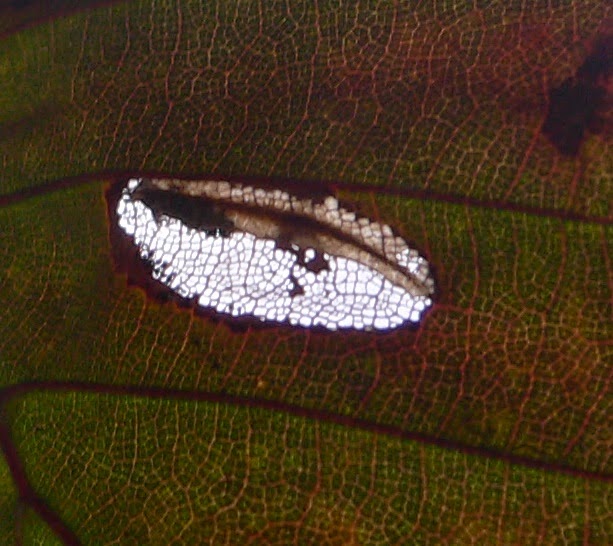 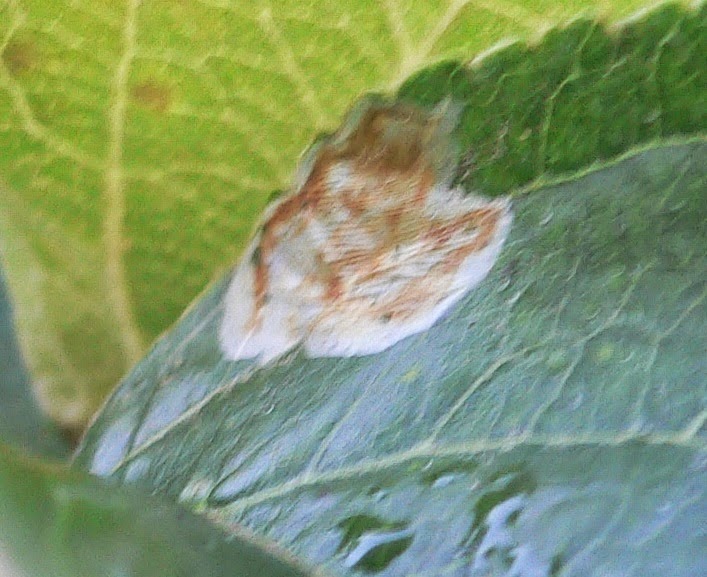 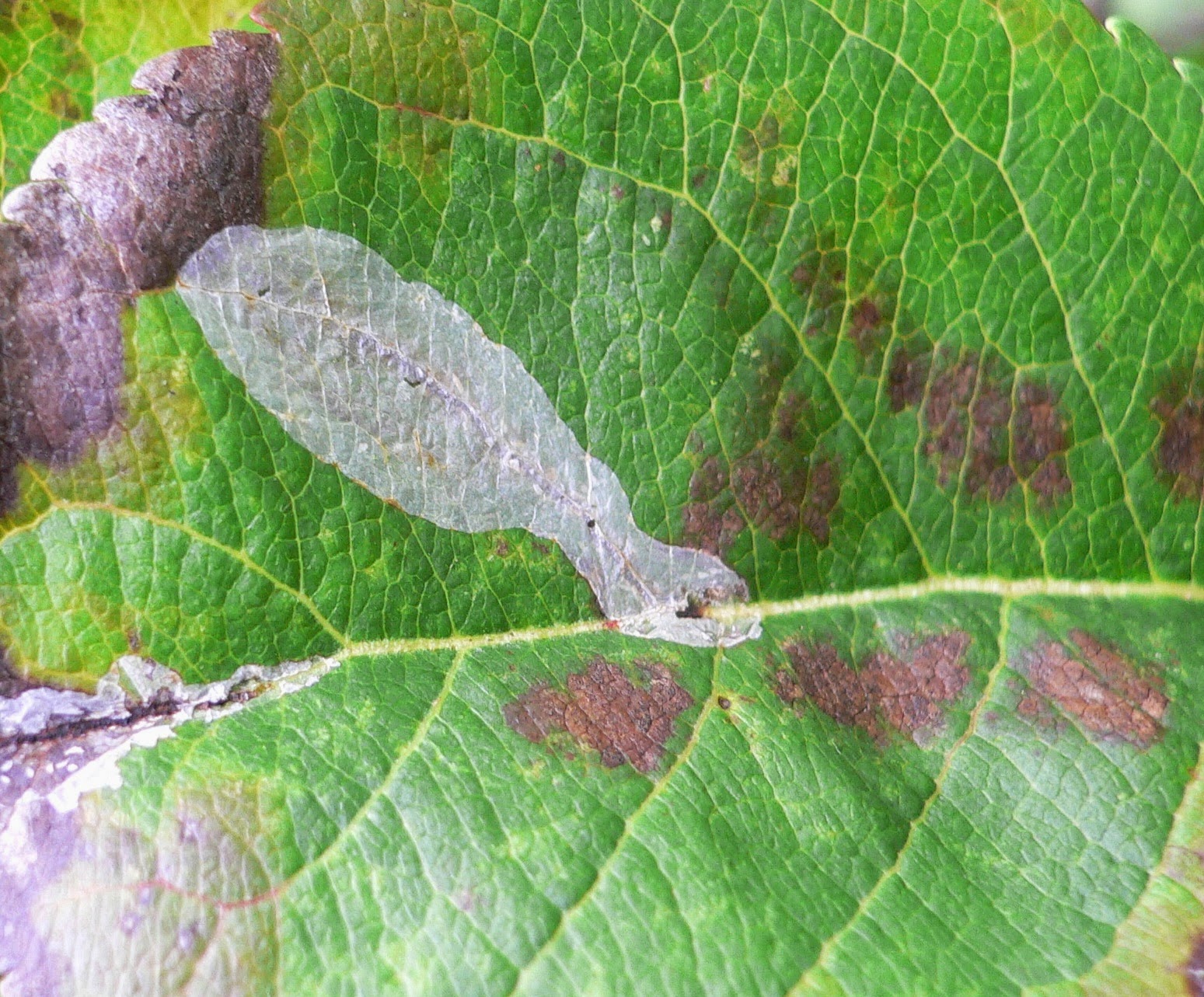 I've had a very dull time since mid-November, with little trapping and no moths at all on the few occasions I lit the lamp. However, I thought you might like to see my trap's current use as a temporary Christmas bauble, placed in the treehouse which Penny and I are slowly constructing for our granddaughter. I will report on due course as to whether this contraption attracts any festive moths but a very Merry Christmas and happy New Year to all in any event.  Martin Wainwright, Thrupp, Oxon 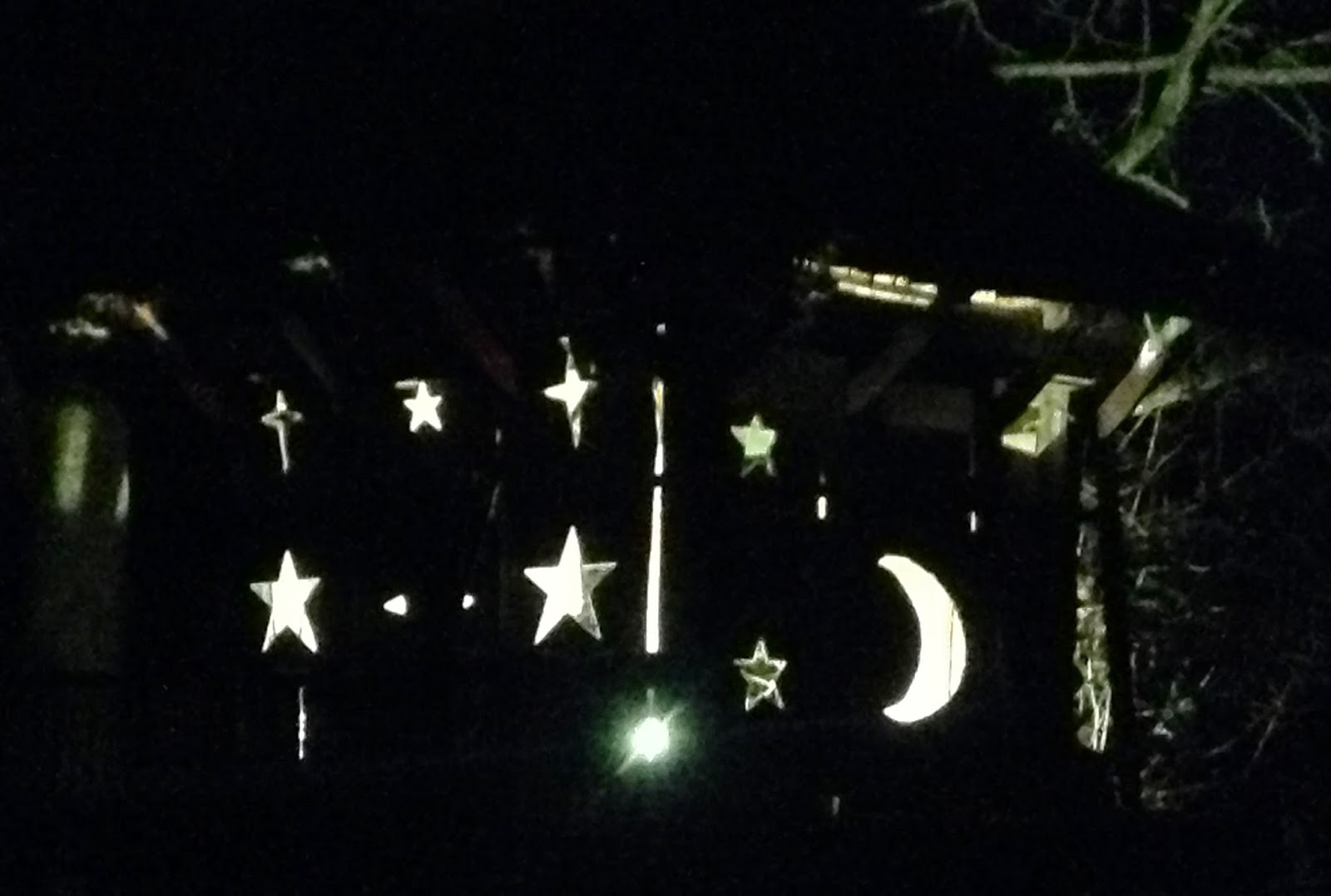 After hearing so many reports of great December catches (especially the epic catches of around 1500 Mottled Umber in one heath trap) I chose to do my monthly surveys at Bagley Woods and Harcourt Arboretum last night, having waited for the promised 12oC and cloud to maximise the catch. The wind blew the cover off some electrics which then got wet and shorted meaning my Bagley traps were all empty though there were still 8 Mottled Umber on a nearby wall suggesting it could have been fairly good. This gave me some hope that my Harcourt traps would make up for an extremely disappointing start to the day. One trap was empty, the other had 7 Mottled Umber and 1 Scrobipalpa costella. Not a single Winter Moth or December Moth. My new garden, despite the mild weather, has yielded nothing but the odd Epiphyas postvittana, to the point where I am considering saving electricity and turning it off for a few weeks or so. What this so-far lack of winter will mean for next year's moths I don't know, but it isn't usually a good thing so I'm praying for some frosts. Marc Botham, Didcot

P.S Merry Christmas everyone and a Happy New Year!!
Posted by Marc Botham at 15:34 No comments:

The first of next year's moths...

As we had an unseasonably mild night last night and because woodland is the best place to see large numbers of moths at this time of year (even if only from a handful of species), I took a single MV trap to Bernwood Forest, Bucks for a few hours to get my December 'fix' of moths.  As expected I ended up with another 100+ catch:  Plutella xylostella (1), Acleris ferrugana/notana (10), December Moth (39), Winter Moth (21), Feathered Thorn (2), Pale Brindled Beauty (1), Mottled Umber (31) & Chestnut (2).  Although not entirely unexpected, the Pale Brindled Beauty was a little early.  Dave Wilton

At last, a Rusty-dot Pearl

I put my garden moth trap out last night. It was very mild (the temperature no lower than 11 degrees) and I was rewarded with the grand total of 3 moths - 1 Winter Moth, 1 Light Brown Apple Moth and my very first Udea ferrugalis. I was beginning to think they didn't like my garden, but now one has finally made a belated appearance. 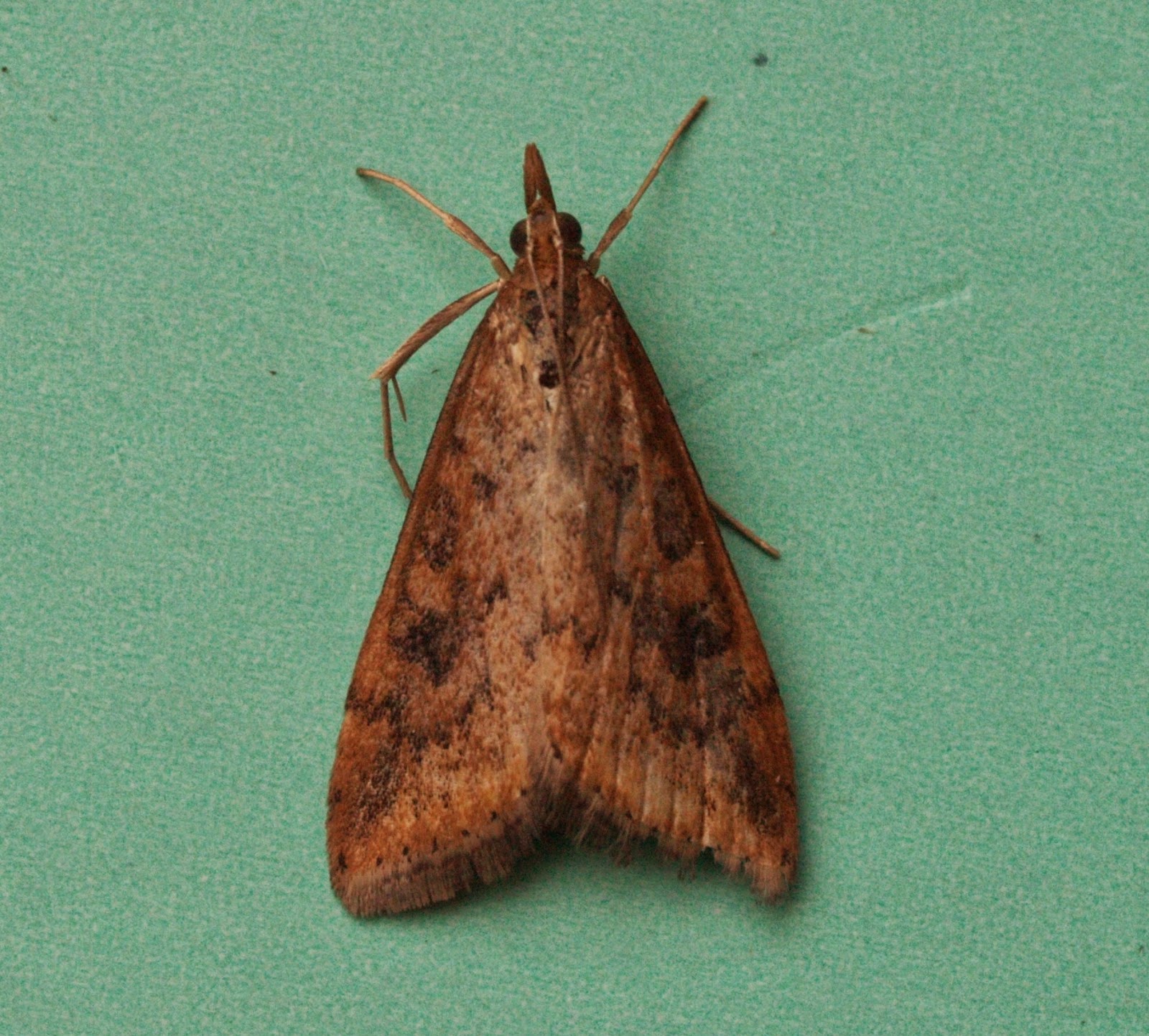 Here is a photo of the Winter Moth. 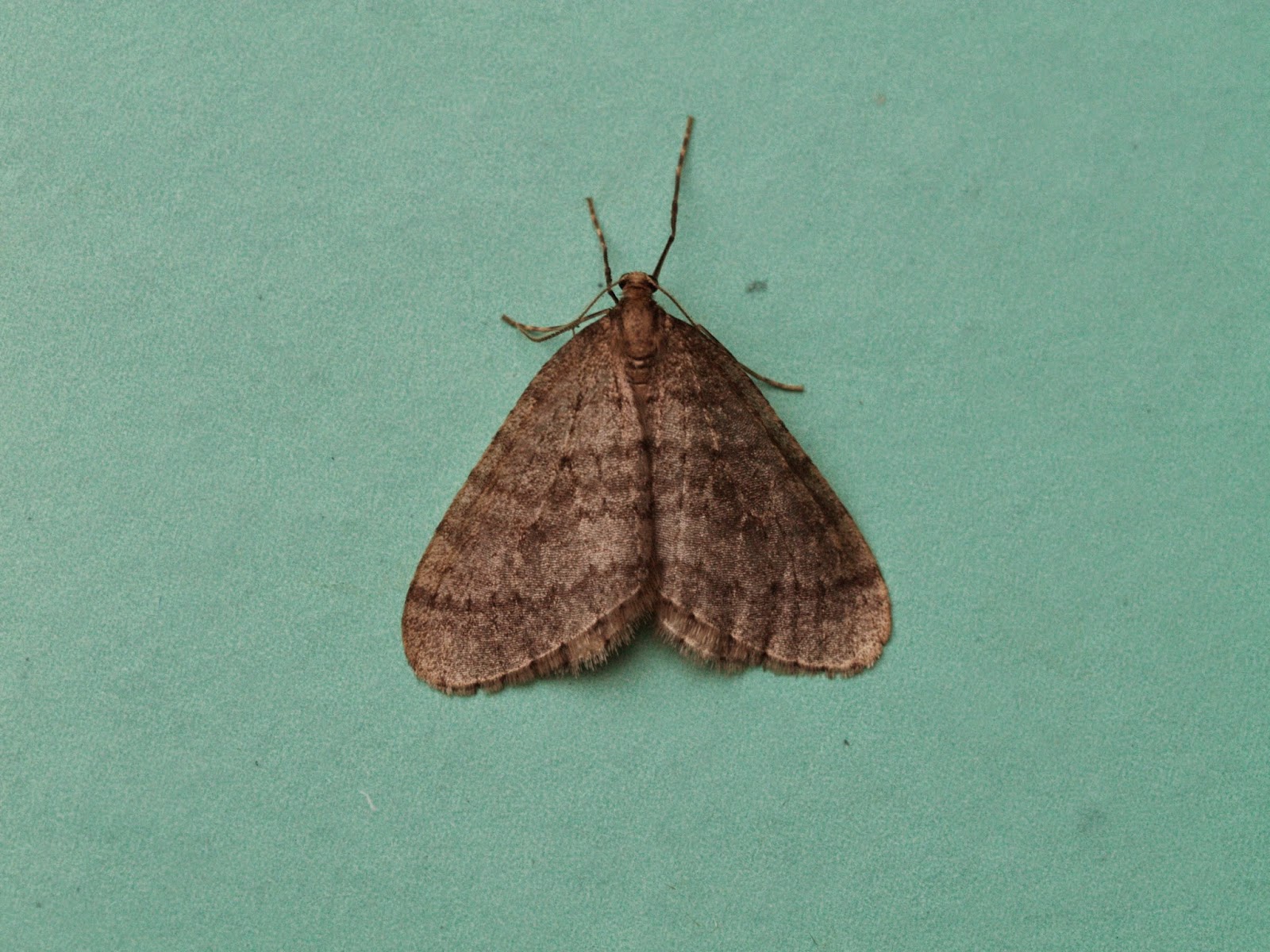 Steve Trigg, Cookham
Posted by Steve Trigg at 11:02 No comments:

Your Records Are Important!

Yes, your records really are important.  We have only another two years of recording before the cut-off date for the UK moth atlas due to be published in 2018.  For those who have yet to do so, now is the time to get your records for 2014 up-to-date and passed on to your County Moth Recorder.  Many of you will have done this in previous years and will already know in which format they would prefer to receive them (eg as a MapMate sync file or in an Excel spread-sheet), but for those of you who haven't it would be helpful if you would please contact your CMR first and ask.  Even hand-written records would be better than none at all, but it is important that you know what to include.

Remember also that their areas of responsibility are divided up according to the Watsonian Vice-County system for biological recording which basically uses the counties as they were prior to the political boundary changes of the 1970s.  The main differences between then and now relate to Berkshire and Oxfordshire (VC 22 Berkshire includes much of present-day South Oxfordshire, the River Thames acting as the boundary) and the fact that the area around Slough and Eton comes under VC 24 Buckinghamshire.  However, don't worry too much about this because the CMRs are quite used to shuffling records around between each other!  The map below gives a rough idea of the Vice-County boundaries. 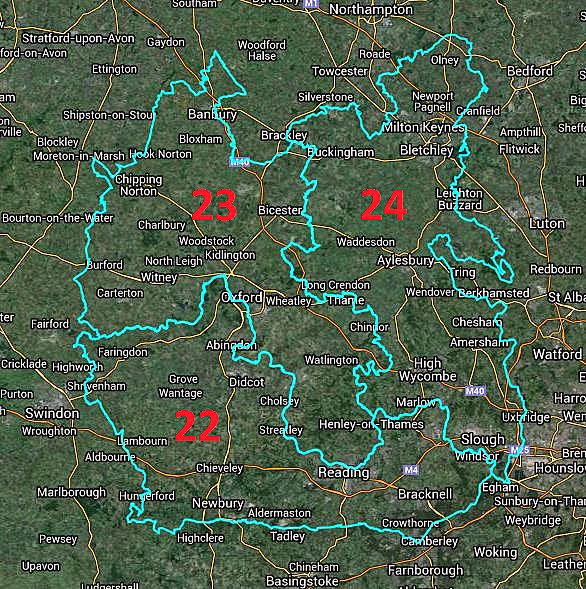 The latest version is now available

Peter Hall
Posted by Peter Hall at 11:48 No comments: