I have been asked to run a moth night at a nearby school on 23rd June. I realise it is the worst possible date in terms of waiting for it to get dark. I wondered if, from past experience, anyone is able to give some indication of the earliest time we are likely to get moths attracted to light, sugar and wine ropes.
Andy Newbold, Sibford Ferris, Oxon.
Posted by Unknown at 10:52 4 comments:

Radio 4 Extra - Requiem for a Moth

Here's something well worth listening to!  Narrated by our very own Martin Wainwright.
http://www.bbc.co.uk/programmes/b010t6nr#play

It was nice to get a bit of lepidopteran relief from a series of dull days yesterday. This Small Magpie suddenly appeared in our kitchen and was kind enough to pose for a photograph. It has now been moved to the garage, where I hope it will manage to avoid the spiders. I guess these alternating cold and mild days might throw up a few more surprises before the month is out. 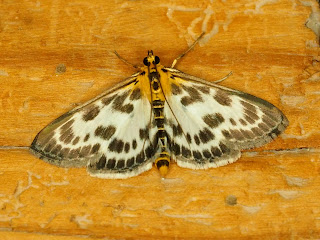 Well, I haven't been trapping and the windows and porch lights have failed to attract any moth species so far this year, but I was somewhat surprised to find that my first moth of 2017 was an adult Cydia pomonella. It was resting on the inside of the kitchen wall. I have been cutting back an old apple tree in the garden over the weekend, but is this the most likely source of this unseasonal visitor?

I spotted this tough caterpillar eating one of my roses the other day in quite frosty conditions. I forgot about it, then spotted it again today and took some photos. It looks like an Angle Shades to me, but I'm not great on larvae-ID. I was struck by what seems to be an inflated anal plate - in fact I thought I was looking at a head for a short while. Is this a defensive adaptation while it is exposed and very vulnerable to hungry birds? Or could it possibly be blister-type damage from an attack. I went out this evening and it has moved round to the underside of the same stem, but is no longer showing the swelling. It's now getting very cold out there so I'll be interested to check it out again tomorrow.

Any ideas what it is...and the nature of the blister/swelling? 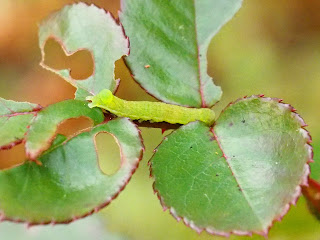 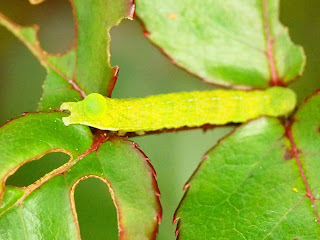 Many thanks
Mick Jones

As usual I ran the actinic trap from dusk in the garden last night.  At 10pm (by which time the temperature had dropped to freezing) I switched it off, having got nothing apart from a few winter gnats.  A mere ten minutes later my better half earned herself a few brownie points by summoning me to the kitchen to look at a moth which had appeared on one of the windows.  A quick trip outside with a pot confirmed it as my first Early Moth of 2017 - nice one!

For me at least, 2016 ended up being rather good for moths even though for much of the year it didn't look as though it would turn out that way.  Well in excess of 900 different species were seen, all of them within VC24 Bucks, and I've chosen ten particular highlights below.  Some of them might seem odd choices but, having produced 16,600 records for the county during the year (many more times that number of individual moths), it was quite difficult to decide which to include and which to leave out!
﻿
﻿﻿


The first significant find for me was some Lunar Hornet Moth workings in the trunks of sallows which had been felled along the disused railway cutting adjacent to the old airfield here at Westcott.  This is the closest I've managed to get to this species so far - one day perhaps I'll get to see an adult!  Netted Pug has to be one of the smartest of moths and is up there next to Mocha in my list of favourite Bucks species.  Its rare appearances at light traps are definitely something to turn a good session into a great one - I only wish it would turn up more often.


Fox Moth is a very uncommon species in Bucks and to get a pair of females to the same trap at Stoke Common on 6th June was unprecedented for me, especially as two weeks previously I'd been lucky enough to catch another female in Bernwood Forest.  In contrast, Tawny Shears isn't a particularly rare British species but these days in Bucks it is exceedingly difficult to find, so this example caught at College Lake on 22nd June was particularly nice to see.  It was in fact the first occasion that I've ever had the moth to one of my own traps in the county.

The day-flying priority species Forester exists in Bucks in a number of very small discrete colonies but the discovery of a new location for it happens very rarely, so on 28th June it was very nice indeed to find the species surviving in the corner of some wild-flower meadows at Charndon, some distance north of any other site in the county.
﻿﻿
﻿


In our area the rather diminutive Triangle, a Red Data Book macro-moth, seems confined these days to Bernwood Forest although it was once a little more widespread in the county.  It is understood to spend much of its time high up in the tree canopy, making it a very difficult species to see.  The rather windy conditions experienced when trapping in the forest on 9th July may have been the reason why two examples came down to light traps that night.


It is always pleasing when efforts at providing food-plant in the garden for certain species finally bear fruit!  Alder Buckthorn has been grown here at Westcott for the last six or seven years, originally aimed at helping the Brimstone butterfly, but the appearance of Sorhagenia rhamniella a couple of times in 2016 suggests that it is now being used by other species too.


Quite a few migrant moths were seen during the course of the year, mostly here in the garden.  The beautiful Palpita vitrealis was a first-time visitor to Westcott, unlike Dark Spectacle and for that matter Convolvulus Hawk-moth which I've chosen to leave out, which have both made previous appearances in the garden - not that they were any the less welcome!

The final species was seen during a Bucks Invertebrate Group search for leaf-mines in Bernwood Forest on 15th October.  The active larval case of Coleophora potentillae (below) was found on the underside of a bramble leaf, just a matter of a few hundred metres from where E.G.R.Waters discovered the first for Bucks way back in 1928.  Since then there has been only one other record for the county!

If anyone else has the inclination to present a few notes on some of their own highlights from 2016 during this very quiet period for moths, please feel free!


A comparison between two different bulbs using a Robinson trap.


Throughout  2016 I attempted to find pairs of nights that were not more than a few days apart and with forecast weather conditions in terms of temperature, wind speed and rainfall as similar as possible.  On one of the two nights I would run my Robinson trap with a standard 125W MV bulb and on the other night I ran the same trap in the same place but with a 20W Blacklight (Eco) bulb.

In total 35 pairs of results were obtained.


A summary of the results is given below.


The following table shows in which months each of the pairs of readings were obtained.


Although there were significantly more individual moths and species caught with the MV bulb the differences appeared to be less marked early and late in the season.  I wonder if some of the differences can be attributed to the brighter light from the MV bulb penetrating the surrounding vegetation (particularly deciduous trees and shrubs) in the summer months. It would be interesting to repeat the experiment in a more open situation than where I run my trap.


I have been asked whether there is any indication that the different bulbs attract different species. My feeling is that there was no evidence of this in my results. Of the species caught with only one type of bulb the majority were species caught in small numbers (often only one) and on very few occasions and which bulb attracted them was purely chance.


The few species where there might have been a difference are shown in the table below.  To produce this table I have only chosen species that were caught on 7 or more occasions and then picked the five species that seemed to favour each bulb. My own feeling is that these differences were probably due to chance and a lot more data would be needed to draw any conclusions concerning differences in species caught.


My conclusion from this experiment is that the 20W eco bulb is worth considering as an alternative to the 125W MV bulb especially as the latter become less readily available. It looks as if generally fewer moths and fewer species will be caught on each night the trap is run.


The eco bulb does however have certain advantages.


I have no idea of how long the bulb is likely to last or whether it will deteriorate over time.


There are of course other alternatives to MV bulbs but I have no experience of these.