This is a request for those that use the Moth Dissection website either directly or indirectly, to consider sponsoring the site . I make this plea every year so that we can cover the running costs and keep it going. There's been an astonishing number of new dissection images as well as adult, larval and other stages posted. Every day new images appear. So please consider helping to keep it going. Thank you. Peter Hall

As I've mentioned on here before, finding out what people think about their own mothing year is a fascinating exercise (to me, anyway!).  Each December I usually try to present some information about how things have been in the garden here in the hope that others might be tempted to do something similar.  That's not seeking comparisons between Westcott and other sites (all will be different, due not least to effort and local habitat), but looking at how each one's results compare to previous years at that same site.  With dissections for 2022 completed earlier than usual (many thanks, Peter), I have an excellent idea already as to what kind of year it has been for moths at Westcott so here are a few statistics to compare with previous years:

Number of nights the lights were run (1st Jan to 30th Nov):  310, of which 121 were with a single twin-30w actinic and the remainder with two traps (37 nights using two twin-30w traps and the remainder with one 125w MV & one twin-30w actinic).  That amount of effort is broadly similar to the previous four years, although running two actinics in the garden is not something I've tried before.
Number of species caught:  742, comprising 382 micros and 360 macros.  That is the highest annual species count ever for the garden, exceeding last year's record total of 712 by a significant margin.
Nights with 100+ species:  18, spread between 16th June and 1st August and all using both traps (125w MV and twin-30w actinic).  A further 13 nights came quite close with more than 90 species recorded and the results from one of those (19th July, 96 species) came from the actinic alone because the MV failed not long after it was switched on and contained zero moths when inspected at dawn.  The night with the highest species total was 11th July with 167, while 17th & 18th July shared second place with 154 each.  The year's results are certainly an improvement over both 2020 and 2021, being broadly similar to 2019 but still not as good as 2018 when there were 26 nights with 100+ species.
Best night for moth numbers:  2nd August when the total came to 782 individual moths (of 91 species).  The best night for species (11th July) had produced only 660 moths.  The second highest moth count occurred on 21st July (706 moths of 138 species) and that was the only other date on which the total surpassed 700.  Those figures are not at all exceptional here and, for example, have a way to go to catch up with the regular 1,000+ nightly totals achieved during 2019 using the same two traps.
Highest overall counts for a single species:  Common Footman (1,575), Large Yellow Underwing (1,439) & Lunar Underwing (1,248) for macros and Acentria ephemerella (2,195), Agriphila tristella (547) & Patania ruralis (491) for micros.  In all, seven specific species passed the 1,000 barrier, the other three being Flame Shoulder, Setaceous Hebrew Character & Common Wainscot.  Heart & Dart (674) showed an improvement over its dismal performance in 2021 but still has a way to go to get back to its normal position amongst the highest counts.  Small Square-spot (512) was also working its way back up towards another peak after a trough of just 17 individuals in 2019.  It seems to undergo regular cycles like this lasting seven or eight years.
New for the site in 2022:  Seven macro and 16 micro species which, incredibly, is almost identical to the results for 2020 & 2021 and takes the garden lepidoptera count to 1,097 (606 micro, 459 macro & 32 butterfly species).  The new macros comprised Raspberry Clearwing & Sallow Clearwing both to pheromone lures during the daytime, while the overnight traps brought in Yellow Horned (common locally, long awaited), Jersey Mocha (migrant), Rest Harrow (migrant), Wormwood (widespread but seldom comes to light) & L-album Wainscot (spreading).  Of the micros, two were added as leaf-mines (Eriocrania sangii on birch, Phyllonorycter tenerella on hornbeam) and two as by-catch to pheromone lures (Triaxomasia caprimulgella to LUN, Pammene giganteana to MOL) while the remainder came to light:  Tineola bisselliella, Caloptilia populetorum, Caloptilia alchimiella, Povolnya leucapennella, Acrocercops brongniardella, Scrobipalpa ocellatella, Coleophora discordella, Elachista rufocinerea, Merrifieldia baliodactylus, Cnephasia pasiuana, Epinotia trigonella & Pempelia palumbella.
Total number of moths caught in the garden (1st Jan to 30th Nov):  38,069 which is a marked improvement over 2021 (29,330 for the year) but nowhere near the total achieved in 2019 (54,400).
So to summarize, moth diversity at Westcott was above normal levels while moth abundance showed a recovery from the low of 2021 but was still significantly down on what was achieved in 2019.
2022 will be remembered as a particularly good year for migrants although Ancylosis oblitella was probably the only interesting one here not already mentioned.  Most of those seen at Westcott were the more common species - there were just more of them than usual.  They included Vestal, Four-spotted Footman, Small Marbled, Bordered Straw, Scarce Bordered Straw, Small Mottled Willow, Delicate & Pearly Underwing as well as Hummingbird Hawk-moth, Silver Y & Dark Sword-grass which are annual visitors.
Dave Wilton Westcott, Bucks
Posted by Dave Wilton at 15:30 3 comments:

Very little in trap, but the first Conistra rubiginosa for the year in Denham - as usual undeterred by a cold night (Nov. 28-29). So keep those traps working from time to time, and ignore the temperature! 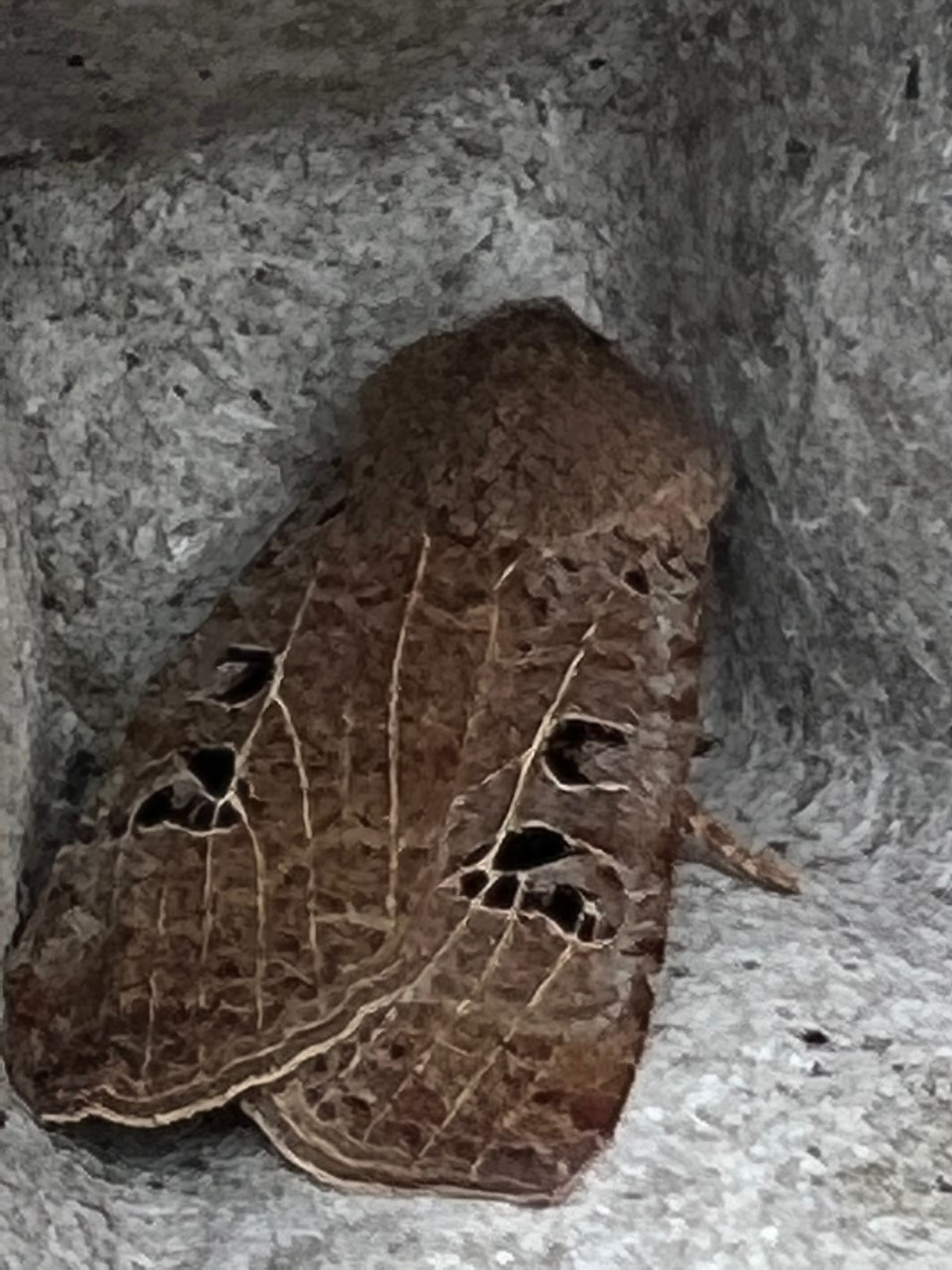 I have had neither Mottled, nor Scarce ditto this year; and none in local woods either. Is this a common experience elsewhere? 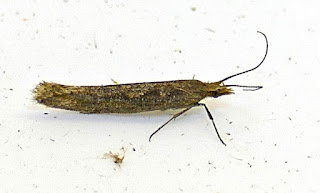 Things keep ticking over in the garden here.  On the 21st there was just a single Red-green Carpet to the overnight actinic light, the closest I've come yet to having a blank night this winter, but otherwise there has always been a selection of the few species which are still around locally at this time of year (for example, seven moths of five species last night, all macros).  Recorded over the past week have been Zelleria hepariella, Emmelina monodactyla, December Moth, Red-green Carpet, Winter Moth, Feathered Thorn, Scarce Umber, Mottled Umber, Sprawler, Brick & Silver Y.
Zelleria hepariella is one of the handful of lepidoptera species which use ash as their sole larval food-plant.  It still seems to be doing reasonably well despite the fungal disease Hymenoscyphus fraxineus (Ash Die-back) which is causing the demise of many trees locally.  Although never common, it is a moth that can usually be relied upon to put in a single garden appearance here each year.  This example was actually the third for 2022 and I've had it to light at four other sites in the county too.
Brick (one here on the 25th) seems to be the longest-lived of the autumnal species and records of very faded examples in mid-December are nothing unusual nowadays.  However, it is getting a bit late now for Sprawler, of which there were two in the garden on the 24th.  In past years it has occasionally lingered on until the end of this month but I have never yet had a December record.  The December Moth count is now up to 24 for the year, even though we haven't got to December yet, and amongst them have been five females so far.
Dave Wilton Westcott, Bucks
Posted by Dave Wilton at 12:08 2 comments:

. . . . .that I'm getting the hang of some basic micros, this turns up. Came to light on Sept 3rd near Chesham- can't find anything that looks like it in the books. Someone please put me out of my misery? 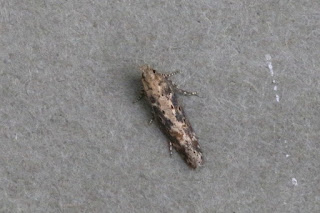 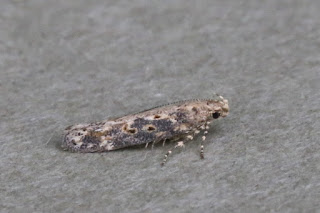 Earlier in the year

On the 4th August, this smart micro turned up in Stoke Goldington. Looks (to me at least) a candidate for Bryotropha basaltinella, but would need the chop to be sure? 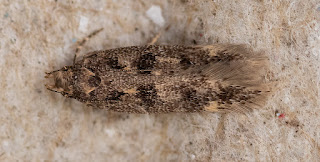 Three or four days ago, with the weather having turned much colder and wetter, I wasn't surprised that catches dropped away considerably and just three moths came to the twin-30wt actinic light on each of Wednesday and Thursday nights (December Moth, Red-green Carpet & Mottled Umber on Wed 16th and Red-green Carpet, Winter Moth & Scarce Umber on Thurs 17th).  I was beginning to think that was it for the year, but last night there was an upturn thanks to it being calm, dry and overcast.  The temperature still fell away to 4 or 5 degrees here but those moths which fly at this time of year are used to the cold (Winter Moths in particular seem to have glycol in their veins!).  The light brought in Agonopterix heracliana (1), Epiphyas postvittana (1), Eudonia angustea (1), December Moth (2), Red-green Carpet (1), Winter Moth (2), Feathered Thorn (4), Scarce Umber (5), Mottled Umber (1) & Brick (1).
Prior to the cold snap we had another period with southerly winds when a number of good migrants were seen in the country (including Diasemiopsis ramburialis and Nigel's Diplopseustis perieresalis in our area), but nothing significant turned up here.  A Dark Sword-grass on the 12th and Silver Ys on the 12th and 14th were all that visited Westcott, that's apart from further appearances by Plutella xylostella, Udea ferrugalis & Nomophila noctuella as well as several examples of Turnip Moth, White-point and Angle Shades which may or may not have been migrants.  Some of the Turnips were very fresh and quite nicely marked, like the male below.
Since the 13th the twin-30wt light has been run on the window-sill inside our conservatory, something I've been doing during the winter months for several years now and it has made no noticeable difference to the number of moths recorded.  I check the windows once or twice in the evening and again before dawn, potting up any arrivals, but it saves having to mess around with a trap which at this time of year few of the moths actually enter anyway.  I probably won't put a trap out in the garden again until the end of March.
Dave Wilton Westcott, Bucks
Posted by Dave Wilton at 11:33 No comments: