I continue to run the twin-30wt actinic light here nightly at least until midnight and, apart from the weekend of the 12th/13th when I was away, at least one moth has appeared every time for the last two or three weeks so there is still good reason to continue trapping!  For example, the last few nights have produced Winter Moth (18th), Sprawler & Red-line Quaker (19th), Winter Moth (20th), Winter Moth, Feathered Thorn & Scarce Umber (21st), two Feathered Thorns (22nd), two December Moths (23rd) and Red-line Quaker (24th).  I'm still waiting for Mottled Umber here but did get a smart specimen in some private woodland in south-west Bucks last night while out trapping for Plumed Prominent.

Thanks to the efforts of Martin Albertini, Ched George, Alan Gudge and myself, over the last couple of weeks Plumed Prominent has been confirmed from six different tetrads in Bucks (two new sites, one of them an excellent garden record, and four from previously known locations).  This scarce moth is obviously still doing quite well in the Chilterns between Marlow and Henley and the main barrier to finding the species at other sites in that general area is the difficulty of getting permission to search for it (most woodlands with potential are in private ownership, some of them on estates that don't appreciate visitors at night!).

I got this a month ago, only now working my way through the records - this Barred Sallow seems to conform to the aberrant form in this link http://ukmoths.org.uk/species/tiliacea-aurago/adult-aberration/ 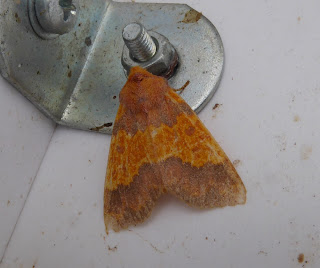 Back on 10th October I collected a couple of mines from leaves of Snowberry growing in our garden and I thought that they'd turn out to be Phyllonorycter trifasciella which I've had here previously as the adult moth as well as finding mines.  That species has three generations each year and adults should have emerged by now, so today I decided to open the mines to see what was inside.  I was very pleased to find that both actually contained the greenish rugby ball-shaped cocoons of Phyllonorycter emberizaepenella which is bivoltine and over-winters as a pupa (trifasciella doesn't form a recognisable cocoon).  There are just five previous records of emberizaepenella for Bucks so this seems to be quite a good discovery.  It becomes this year's 40th micro species found only as a leaf-mine here in the garden (there have been others where I've had the adult too) so shows how useful it can be to search out this stage of the life-cycle.  In this particular case I shall retain the cocoons and hope to see the adult moths emerge early next year.

Let there be light 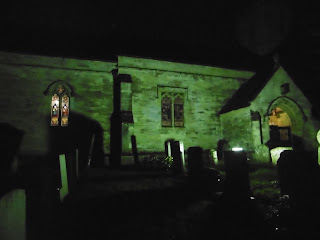 Sorry, no moths in this post (though a couple of Sprawlers came last night). I just thought I'd share the latest use to which my Robinson trap is being put: floodlighting the launch of the Friends of Holy Cross church in Shipton-on-Cherwell.

It's on Saturday 3rd December at 7.30pm and the trap will be performing its usual function as well as illuminating the little church, which you may know from pottering along the Oxford Canal towpath or the circular walk via the romantic, ruined manor house at Hampton Gay. All welcome.  Martin Wainwright, Thrupp, Oxon.
Posted by Martin Wainwright at 19:32 No comments:

Despite the bright super moon the milder temperatures resulted in a better catch (17 moths, 8 species) last night including this one. 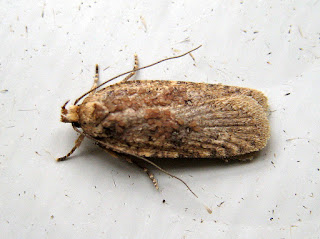 Is it possible to identify which species from the photo?

The moth is now flying locally.  Last night I revisited the same site near Marlow, Bucks and ran traps under exactly the same field maples as I did last Thursday.  An MV under the oldest, most substantial tree I've ever seen produced five fresh males and another MV under a collection of much younger trees produced one further male.  They started to appear at about 6.30pm and I saw no further movement from them after 8pm (I packed up an hour after that).

By the time I got back home to Westcott the 'conservatory actinic' had brought in a fleet of Feathered Thorns to the windows (11 in all).  In addition to my first garden December Moth and Scarce Umber of the season, there were also Caloptilia stigmatella, November Moth sp, Dark Sword-grass & Red-line Quaker.

Just a tad early, but timely for me 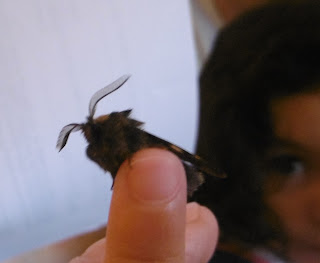 My moth-fixated granddaughter arrived late last night and I feared that my reputation (in her eyes) as a provider of endless moths would be in tatters this morning. But no. This December moth, probably the last new-for-the-year that I can expect, shared a very soggy pile of eggboxes with a Green-brindled Crescent. She was very satisfied with both of them.  Martin Wainwright, Thrupp, Oxon

Posted by Martin Wainwright at 13:09 No comments:

Although not its best local site (which is probably in Oxfordshire near Henley-on-Thames), yesterday afternoon I went to some woodland near Marlow which is the most reliable location for Plumed Prominent within Bucks.  Active during November and December, this is a nationally scarce species which in our area survives within just a few Chiltern woodlands where there is a reasonable supply of field maple.

The weather conditions last night were fine for the moths which fly at this time of year (6C at dusk, 5C at 9pm when I packed up) and I came away with nine species:  Emmelina monodactyla, December Moth, Red-green Carpet, Spruce Carpet, November Moth agg, Feathered Thorn, Sprawler, Brick & Yellow-line Quaker.  Of the target there was unfortunately no sign, suggesting that it may be a late year for it, so I'll probably try again next week.  Persistence usually pays off at this site (for example, in 2014 it took me three chilly visits before I got just the one male!).  My experience is that it flies from about 6pm onwards and if you haven't seen one by 8.30pm you might as well give up and try another day.

Of note amongst the adult moths were two of the seven Red-green Carpets caught, both of which were all-green females with no sign of red.  Perhaps the most interesting record of the evening was actually a caterpillar, a young (17mm) larva of Clouded Magpie being found on wych elm.  By this time of year it should be in the pupal stage which suggests that it was the off-spring of a second brood (see this report on the blog from the same general area last year).  Elms do tend to hang on to most of their leaves quite a bit longer than many other trees, but I would still have thought it unlikely that the caterpillar would survive to become fully grown before they fall.

Back home at Westcott, the actinic light has been run from inside the conservatory for the past couple of nights, a spot that I often use until bedtime during the winter months especially if a frost is forecast.  A check of the windows at midnight on Wednesday night produced a November Moth agg and four Winter Moths (my first of the season), while last night there was a pair of Feathered Thorns.

The G.M.S., which I take part in, involves putting our trap out every week, on the same night where possible, in the same position, from the beginning of March to the beginning of November. Comparing year on year catches for comparison becomes possible.

The last two years are:

Species have increased very slightly but the total is down just over 50%.
A large amount of the missing moths are accounted for by vast reductions in some of my gardens more common species. See below;

Does these figures look familiar to other mothers or has it just been a poor year up here.

Judging by the lack of postings on the blog over the past few days I'm sure everyone, like me, is seeing very little at the moment!  Sprawler appeared in the garden here for the first time on 30th October and that night proved to be the last decent catch (37 moths of 13 species, including a second Large Wainscot and a late Silver Y).  Seven species appeared the following night, four on 1st November then just a singleton (Epiphyas postvittana) on the 2nd and that's been the story up until last night when I got my first zero return.  However, if the temperature is still a few degrees above freezing at dusk then it could still be worth running the trap even if only for a few hours because the moths which fly at this time of year are quite hardy individuals.


﻿
Yesterday I went out searching for leaf-mines again and there are still plenty to be found even though leaf-fall is well under way.  I went looking in particular for Ectoedemia argyropeza which is a late miner of aspen and managed to find one occupied mine on a fallen leaf at nearby Kingswood.  There were plenty of seemingly vacated mines, some of them much smaller in size than the occupied one which made me wonder if the larva sometimes retreats into the leaf petiole (where it starts mining) if it is disturbed.  Another search for the related Ectoedemia hannoverella on black poplar proved unproductive at a couple of sites near Grendon Underwood but, amongst others, I did find tenanted mines of Ectoedemia angulifasciella on dog rose and Stigmella roborella on oak.

Inspired by Dave's earlier post, I thought I would examine some leaves in my garden before I raked them up. The 2 pictures below are of an apple leaf and then an ornamental cherry.
Having looked at the leaf-mines guide, the mines look to me like Lyonetia clerkella - a moth I regularly see as an adult in the summer. Have I got that right? 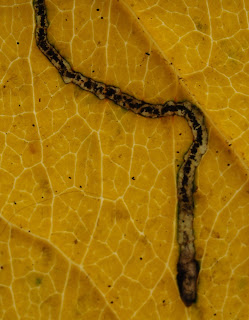 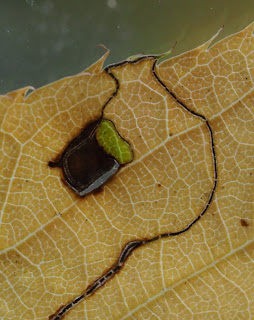 A wander around the garden at Westcott, Bucks in today's sunshine, looking at fallen leaves on the lawn before they were chomped by the mower, produced two good finds.  The first was an active mine on Birch of Stigmella luteella.  This species was new for the garden back on 14th October when I found a vacated mine, but it is always better to see one that is tenanted and in this case it was within a very obvious "green island" on an otherwise brown leaf, the larva being able to stimulate the leaf chemically into continuing to produce chlorophyll for it to eat.


The other was a vacated mine on a fallen leaf of Norway Maple Acer platanoides.  This can only be Stigmella aceris, which is an excellent discovery here.  Back in 2012 I found a single mine on a Norway Maple in Upper Winchendon, just a few miles away, but that and today's find are the only Bucks records that I know of away from the Chilterns where the majority have been found on Field Maple Acer campestre.  Not at all a common species in the county.

Two seen by Wapsey's Wood WDS (near Beaconsfield, Bucks) in rough grassland and scrub. Fw c7mm. My guess is a faded Celypha rosaceana but they shouldn't be flying now. All help appreciated. 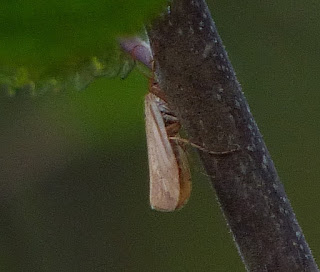 I rescued the micro below from the bedroom curtains this afternoon (fw 5mm). Can anyone suggest what it might be? I know the picture quality is not great. 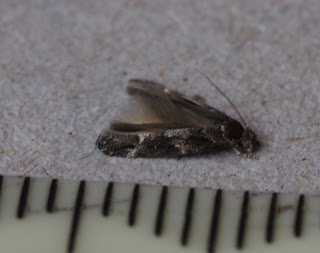