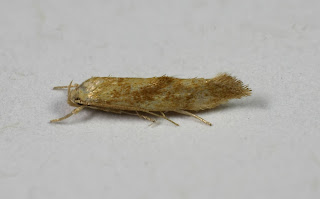 Trapped in North Leigh, but I've drawn a blank on an ID. Any help would be appreciated. Thanks.
Posted by Nic Hallam at 21:57 2 comments:

Just winding up this morning at Linford Lakes Nature Reserve having spent a pleasant hour or so  recording the 209 moths of 51 species that had settled in and around the 125W MV Robinson trap when, almost as if out of nowhere,  these two appeared.  We reckoned they are 2 rather worn Dotted Fan-foots.  If so, they are new records for LLNR.  The atlas reports them moving west from East Anglia and found locally in Oxfordshire so we are en route.. 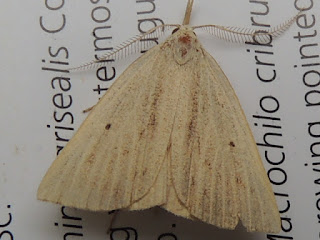 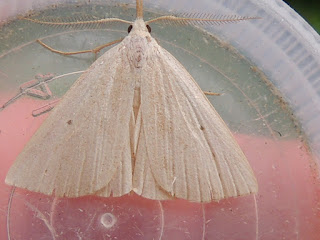 Like most it's been very slim pickings. I'm wondering if this "pale codling" is in fact Cydia splendana? The geometer doesn't seem to quite fit Willow or Mottled Beauty but both are variable. 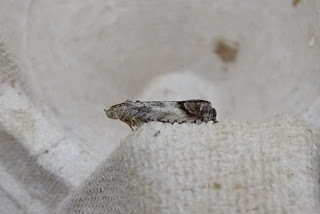 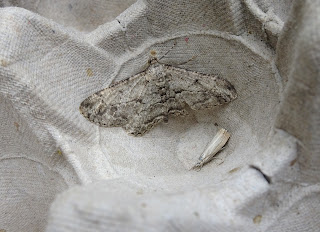 Posted by Mark Griffiths at 10:48 No comments:

What a dismal week - is this really July?  New additions to the garden year-list have been few and far between:

The best night was the 1st with 302 moths of 57 species while the worst was the 5th with 115 moths of 36 species, both of those results being a combined total from two traps (one MV, one actinic).  I ran only the MV in last night's rain but the catch was 187 moths of 45 species which actually was quite reasonable in the circumstances.  However, the same week in 2019 was completely different, producing three nights with counts of more than 100 species, which is why the garden year-list now lies about 60 behind last year's total by 7th July!  Hopefully this is just swings and roundabouts and things will pick up quite soon.  The forecast certainly looks much better for next week.


There were still one or two nice items during the week even though they weren't new for the year-list.  Pine Hawk-moth and Shark each appeared on two of the nights, neither of them being particularly frequent here, while the migrant Dark Sword-grass also appeared twice.

Even though it was really windy, last Saturday night (4th) I took a couple of MV traps to nearby Finemere Wood for the usual three hours in advance of local road closures by HS2 Ltd which will make it difficult to get there for the next month.  The results actually weren't too bad, all things considered, with around 140 species recorded.  Minor Shoulder-knot was out in force (70+) and Black Arches was just starting.  Amongst the micros the grass-moth Chrysoteuchia culmella was way out in front (well over 400 seen), while Acrobasis repandana (100+) & Endotricha flammealis (54) were around in some numbers as you'd expect in woodland here at this time of year.  Quite a few nice micros braved the gusty conditions, including the two shown below.

Some sort of Beauty?

I caught several of these moths last night but I just can't seem to ID them. I'm sure I should know what they are but I don't!
I was delighted to catch two new species to me last week, a Scarce Silver Lines and  Peach Blossom. Many thanks in advance. 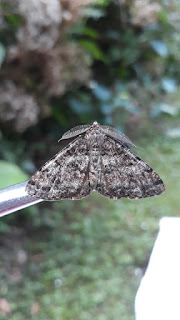 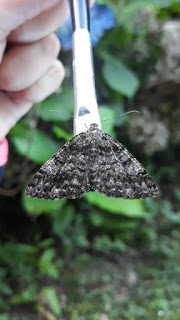 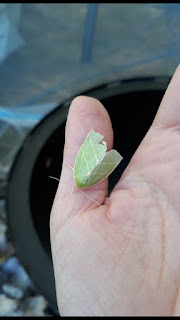 Not a lot to go on I'm afraid. Help appreciated. Thank you. 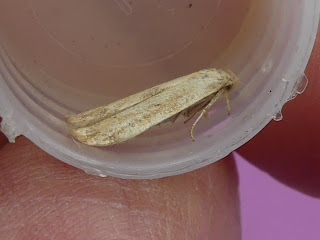 So it does work!

Amongst the clearwing lures I've had for years is one for Hornet Moth and I've never ever had any success with it despite many attempts.  Until today, that is, when I took it with me yet again to a known site for the moth and hung the lure in its trap a couple of metres up a black poplar while I completed a butterfly transect.  It was there from 2.30pm until 4pm and in that time a single male turned up.  I wasn't expecting any results because Hornet Moth females tend to emerge in the early morning so the males have probably begun to lose interest by the afternoon!  However, at least I now know that the lure works.

This moth wasn't in my trap this morning, but I found it nearby.

I can't work out what it is. Can anybody help? 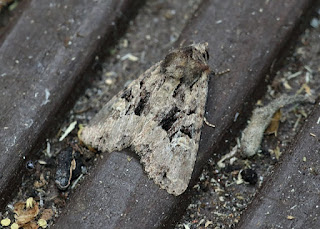 Without knowing exactly where the known sites for Forester moth are in South Bucks, out on my walk this afternoon, I came across one - or more - in fields near Jordans. Not the best phone pic... 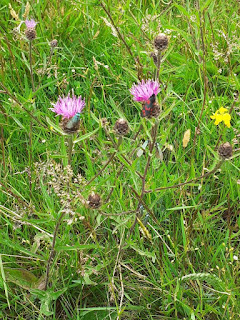 There was another field nearby which looked like perfect habitat but it was mainly fenced off for horses, and I didn't see any in the margins, possibly partly due to the wind!
Dave Morris
Posted by Dave at 16:31 2 comments:

I trapped this moth in my garden in Merton on Friday 3rd July. I was a bit unsure until I saw the previous post, which convinced me. It's definitely a new one for me. 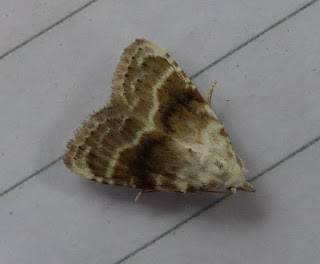 Also trapped this Oegoconia sp. which I think may be quadripunctata, but I think these can't be confirmed without dissection? 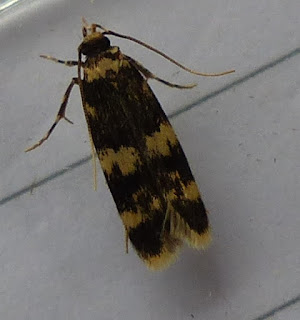 First attempts to re-acquaint myself with sites I've not visited thanks to lockdown this week. On the 28th I had a rather windy and wet walk at Hartslock, looking unsuccessfully for signs of Epermenia insecurella on Bastard Toadflax there. The plant is pretty abundant in the fields east of the lone beech there, but no sign of moth or larva (though the weather was not conducive to finding adults). Not much else of note other than a few Mecyna flavalis, Teleoides sequax spinnings on rock rose, as well as some early mines of Stephensia brunnichella on Wild Basil, and Stigmella catharticella on Buckthorn.

On the 30th, I visited Aston Rowant (sticking to the north side of the motorway), and although it was rather cloudy, the wind mercifully dropped for a bit and I found a few micros. Quantity was provided by Ancylis comptana in its thousands across the main slope, and plenty of Aethes tessarana. Other interesting ones were: Dingy White Plume (a few flushed from most of the larger marjoram patches), Scythris crassisicula (a few adults sat on the rock rose), Cistus Forester (2), Crescent Plume (lots in a big patch of restharrow), Coleophora lixella (one adult), Mompha miscella, Teleoides sequax (adults and vacated spinnings) and Grapholita janthinana, as well as more early Stephensia brunnichella mines.

I also visited Sydlings Copse and found a Tawny Shears larva on Bladder Campion, a new one for me, as well as a mine of the little elachistid Perritia obscurepunctella on Honeysuckle. Trapping there in the evening with some LEDs (2 on the 'heath' and 2 in the fen) sadly didn't produce the hoped for Dentated Pug among the abundant Yellow Loosestrife, but a few other nice things: Dotted Fan Foot, Round-Winged Muslin, Pine Hawk, Minor Shoulder-Knot, Blackneck, Brown Scallop, Kent Black Arches, Small Emerald, Pexicopia malvea and Epinotia cruciana among 81 species. There were also a couple of extras that I think will need the chop - a Monochroa sp. and lots of a Phalonidia sp. Another day time trip later in the week to Sydlings Copse also produced an impressive final instar Puss Moth larva, lots of Nemophora metallica, and what I think is Nemophora cupriacella as opposed to minimella.

Yesterday I had a brief walk at Chilswell Valley as well, and in rather windy conditions swept a couple of Small Emeralds from low-growing traveller's joy, and a surprise Trifurcula sp. that will need the chop.
Posted by Will Langdon at 17:44 2 comments:

A few from this week. The first I thought was Scoparia pyralella? The second one I thought might be a Rustic rather than Uncertain. But it's the first one I've thought was a Rustic, I know they come out later than the Uncertain but would they be this late? Finally I've gone back and forth between Willow Beauty and Mottled Beauty. 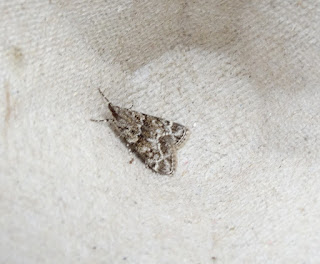 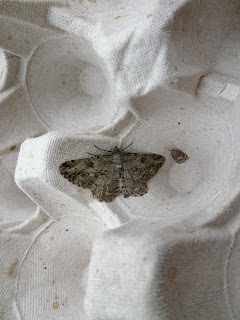 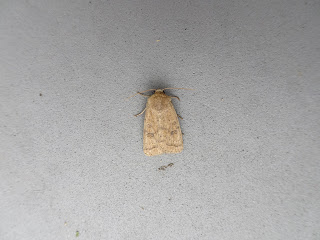 Hi, I am new to moth trapping so please bear with me as I ask novice questions.... I caught the moth below in my trap in my garden in Wokingham, Berkshire on the 26th June- it appears to be a September Thorn (note lack of kink on outer crossline, so I think not an August Thorn). But isn't it very early? I thought these were late July onwards? 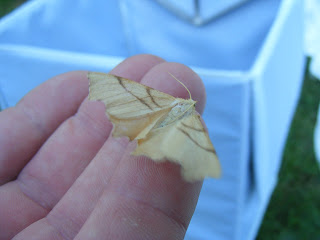 Sorry about the poor photo-it was very flighty and flew off seconds after I took this.

The second caught this morning is, I think,  Dotted Clay (Xestia Baha), but they seem quite variable so I would like some confirmation of my ID. 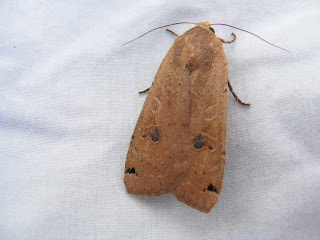 About ten days ago, I mistakenly identified a moth as Monochroa palustrellus, but Dave pointed me to Anarsia innoxiella, commenting that there are only two Bucks records for M. palustrellus, one of which is roughly in my area, so I might get lucky one day. Well, I didn't think that day would arrive for a long while, if ever - and I am still hesitating as I write this. However, I think that the moth I caught last night (1st July) is M. palustrellus. Even though it is a bit worn, it is possible to see what I'm calling the white-outlined black "exclamation mark" - a dash at two-thirds followed by a dot at three-quarters, and the long black streak from that dot to the apex, plus the black line in the terminal cilia. But I'm prepared to be wrong again! I have retained the moth.
Also on the trap was what I think is Coleophora anatipennella: does it need to go under the knife to confirm? Forgive the photos through a glass tube: as it might need to be dissected, I didn't fancy letting it out in case it escaped.
Blogger seems to have joined the two photos.