Three new moths for me?

I ran my trap in the garden last night as the weather forecast was relatively benign even if the full moon and relatively little cloud cover dampened my expectations.

I normally don't set up the trap until about 15 minutes after sunset, but last night I set it going about quarter of an hour before sunset, as that happened to be more convenient.  This may have had a bearing on what I caught.

I checked the trap at about 21:30 and found three moths on it or nearby (but none in it).  I potted these and then left it running until half an hour before sunrise this morning, when I found no moths at all in, on, or around the trap.  So the three moths from yesterday evening were a paltry catch, but turned out to be interesting nonetheless.

One is a Silver Y.  I've been mothing for about 18 months, and although it's a common species, this is the first Silver Y that I've caught: it's strange that I should catch it well past its peak period, even if it has been recorded in all months.  However, I note that the field guide says that it flies around sunset, before most other moths - and I wonder if the fact that I don't usually have the trap running before sunset is the reason that I've not caught one before.

The second moth I have tentatively identified as Diurnea lipsiella, but I'd be grateful for confirmation  It's also the first time I've caught this moth, and it's also one that flies earlier in the day.

The third moth was puzzling me.  I initially wondered if it was a poorly-marked Diamond-back Moth (Plutella xylostella), but I decided that it requires too much imagination to see a diamond pattern.  It did have the same "jumpy" behaviour as other specimens of P. xylostella that I've caught previously.

However, then I saw Dave's post that included Ypsolopha ustella.  This seems to be a better match, though I'm not sure: it is a variable species.  If it's confirmed, it will have the remarkable result that out of a poor catch of only three moths, all of them were firsts for me - albeit unexceptional ones.
Here's a couple more photographs of it: 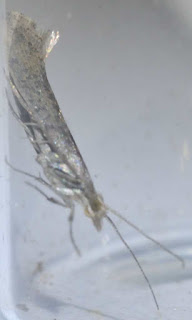