Having read other contributors 2015 statistics and high-lights I thought I'd have a quick look at mine.
As I only started trapping in late May and have only got 15 night's records my overall totals are not great (108 species of macro) but did include some species that others had noted as high-lights (e.g. Tawny Pinion, Chocolate-tip, Bordered Straw).
In order to try pick out the more noteworthy species I tried using the distribution maps on the UK moths website but found that these often came up blank (maybe a problem with my computer?). However, when I logged into the nbn gateway website directly and found how to use the browse sites and browse species facilities and to focus in on Oxfordshire Vice county I found the results interesting. Firstly, of the 108 species I recorded 27 were not on the nbn records for the SP33 10km square. I than decided to look at the surrounding 10km squares and found that only 2 species were recorded for all 9 squares (cinnabar and silver Y) but this was largely due to a lack of records in SP44 and SP42 with only 16 and 42 records respectively (some work to be done here if the nbn records are up-to-date).  At the other extreme the only species I  recorded that was not previously recorded for any of the 9 squares was what I had identified as an Obscure Wainscot. I hope this is correct as there seem to be few records for Oxfordshire and the habitat doesn't seem quite right. 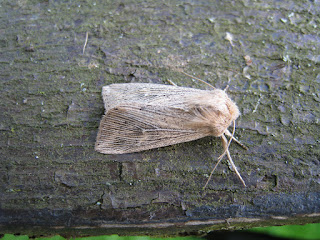 Sorry about the length of this contribution but I am waiting for the wind to stop blowing!

The full list of species that I recorded but were only on 2 or fewer of the surrounding 10km squares were as follows.