I have been trapping in my garden for almost 18 years, and have been taking a few Dark/Grey Dagger specimens each year, as these are not reliably separated without dissecting them.  In recent years I've started doing these myself using British and Irish Moths: an Illustrated Guide to Selected Difficult Species (Unfortunately, I think this is now out of print).  Prior to this Peter Hall and Martin Albertini kindly did them for me.

Every one looked at so far had been Grey Dagger (Acronicta psi).

Peter Hall had previously told that about 1 in 10 of the ones he had in his garden were Dark Dagger, but I thought that may have been because he had a local population, and I had pretty much given up seeing one.

I spent the day today pinning specimens from many groups, as I was running out of pots and needed to rescue some from the freezer.  The last pot had a Dagger sp. in it.  I naturally assumed it would be Grey Dagger.  That would be OK though, as this is probably under recorded and I am happy to get positive records of the species. Most are recorded as the aggregate Dark Dagger / Grey Dagger (Acronicta tridens/psi).

Imagine my surprise when I looked  down the microscope and saw this. 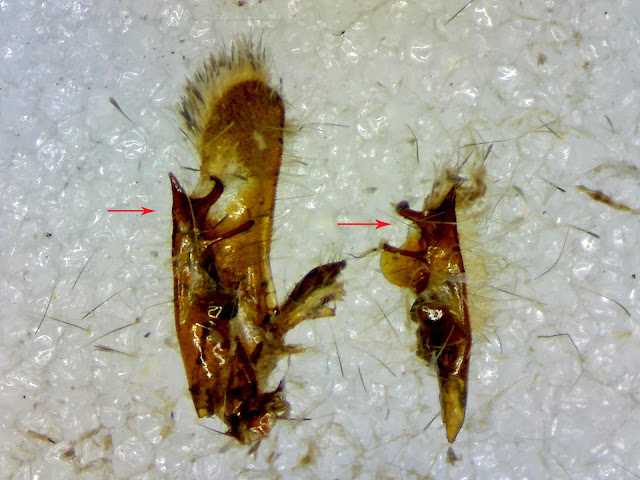 This clearly shows the ventral surface of the valva with three protuding arms, and confirms Dark Dagger (Acronicta tridens).   This is the first time I have recorded this species, so a red letter day for me.

If you have not attempted dissection before, I would encourage you to have a go.  A number of species are quite straight-forward, Dark Dagger / Grey Dagger (Acronicta tridens/psi) and Tawny/Marbled Minor are the easiest, you don't need chemicals for males, which I find most are anyway.  Just pop the fresh specimens in the freezer until you are ready to look at them and then put them under the microscope (you do need a low power microscope).  Then carefully open the tip of the abdomen, the hard plates are usually easy to find and then compare with te book.  You can see from the mess in my photo that I'm doing this just to confirm the ID, not to preserve the specimen!