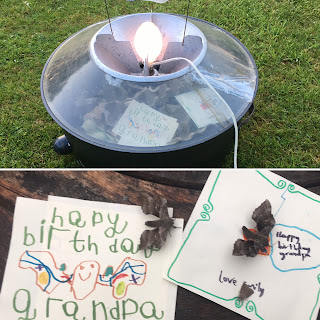 I promised my grandchildren yesterday that I would put their entomological birthday cards into the trap last night and - hey Presto! My first two hawk moths arrived. Very unusually in my experience, one was resting on the grass outside the trap, unmolested by birds although a conspicuous object to the human eye.

This belated debut contrasts with last year when I had recorded all my regular hawks except the Privet and Hummingbird  by 21 May - that's Poplar, Eyed, Lime, Pine, Elephant and Small Elephant - and the first Poplar came on the night of 25 April.

Looking at other records, I get the impression that last year was the exception, but arrivals here do continue to be very slow. Apart from the hawks, there were only three Muslin moths and a Rustic Shoulder-knot in last night's trap.  Martin Wainwright, Thrupp, Oxon

Posted by Martin Wainwright at 06:46