Although I'm still catching only a small number of moths each time I run the traps, a few new-for-the-year species are turning up, and the occasional new-for-the-garden species, too.

Monday night added Seraphim, Least Black Arches, Waved Umber, Common Pug and Epiphyas postvittana onto the year-list and a Powdered Quaker put in probably its final appearance of the year.

Wednesday night's haul added some fresh-looking moths: Green Carpet, Garden Carpet and Lime Hawk-moth; the latter putting in only its second appearance ever.  Various social activities and domestic chores today meant that some of the moths spent the day in the fridge.  Finishing the job at the end of the afternoon, I realised I also had a Pale Tussock and a moth which I'm pretty sure is my first Chamomile Shark. The moth had lost much of its "shark's fin", though the black lines do still run into the fringes: I've added a close-up of the fringes just to be sure. 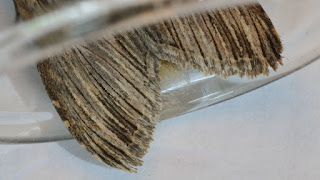 Compared to last year - when good weather coincided with lockdown - most of the species I have mentioned above seem to be appearing about two weeks later this year.  Some of them (Least Black Arches, Waved Umber and Epiphyas postvittana) are up to five weeks later.  But many species just haven't turned up at all so far.