Ryan Clark took a walk in the daytime along a bridleway hedgerow to the south-west of Aylesbury on 17th May and found the smart moth below resting on Field Maple.  It is Pammene trauniana, currently only the second record for Bucks after one in May 1999 from the Milton Keynes area. 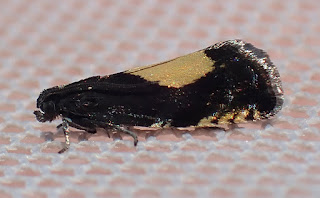 A rare species, the moth is very similar indeed to the rather common Pammene regiana but according to both MoGBI Vol.5(2) and Chris Lewis's British Lepidoptera site the two can be distinguished by looking at their costal strigulae (the yellow and black marks along the outer wing edge).  In the case of trauniana the yellow areas are usually larger than the black, although there are some of both species where these markings are more of a half-way house and will need dissection to separate.
Posted by Dave Wilton at 18:01