Last Sunday 16th May Robert Manasse in Padbury had an early Dewick's Plusia to his garden trap.  This is still an excellent record for Bucks where sightings of the species have only just got into double digits after the first for the county appeared in August 2018. 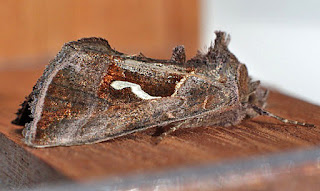 Edit:  a misunderstanding here!  Robert tells me that this visitor to his garden was actually on 16th September last year, but still a very good record.  DW