Last December, Will Langdon posted about finding the winter mines of Phyllonorycter scopariella and ulicicolella on broom and gorse respectively, and in a comment I asked if he might keep an eye open for parasitoids.  While the parasitoids of "typical" Phyllonorycter on deciduous trees are relatively well known, those on these hosts very much less so.  Will collected further P. ulicicolella from near Oxford last month and reared two tiny 1-1.5mm long wasps which he kindly sent me.  They turned out to be Cirrospilus viticola (Chalcidoidea: Eulophidae) which seems only to have been recorded definitely once before in the UK, from Surrey in the mid-19th century (there is one further record marked "unconfirmed" on the NBN database).  It is an ectoparasitoid that kills mid-late instar larvae and then pupates in the mine; on the continent it has been recorded from other Phyllonorycter and different miner genera.

Forgive the non-moth post but it does show it is worth saving parasitoids, especially if reared from unusual hosts.  Many thanks to Will for sending the specimens. 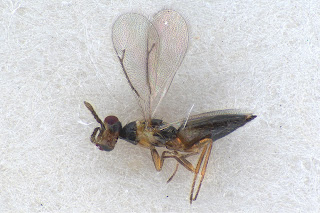 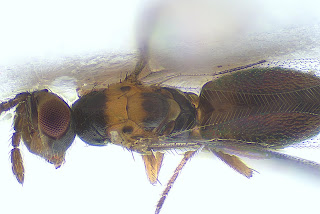 Posted by Charles Godfray at 22:22