Following the tip (no pun intended!) from Dave W. that the Red-tipped are out now I tried my FOR lure at two places this afternoon. I had no luck at Paice's Wood, Berks, but at Decoy Heath, Berks, a single Red-tipped Clearwing came to the FOR lure after about 15mins at about 3.00pm. It proved a little more challenging to photo but eventually sat still for a few seconds. As Dave points out the white edges to the 'tail' are clearly different from the other two 'reds'. The guide suggests that these wear off quickly after a few flights. 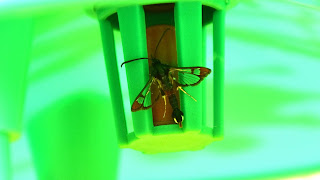 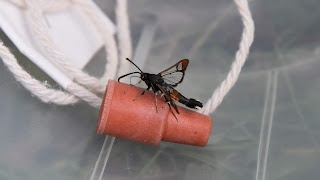 Another White-barred also came to the TIP lure although this took 20mins to appear. 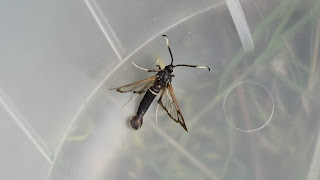