Another first for Berkshire?

Last week Marc Botham added Feathered Ranunculus to the Berkshire county list, which was the 640th macro-moth species to be found in the county. It looks like Paul Black has now added the 641st!

Paul and I believe that this is Southern Chestnut, which Paul found at Snelsmore Common (I think this was from last night). It was flying at around 7.30pm, which is exactly when the books say that Southern Chestnut is normally active.

Until now Southern Chestnut was a species known from the heathlands of Sussex, Hampshire and Dorset. I've not heard of any records from other counties, nor from so far inland before, and as far as I know Paul's record from Snelsmore must be about 50km north of the nearest Hampshire populations.

Paul has passd on the specimen and I want to check the moth against a museum collection before finally confirming it, but Paul and I think this does look like a good candidate for Southern Chestnut - please let us know if you disagree! (The moth is a bit worn, and my photos aren't brilliant, so that makes things a bit harder.)

I guess the likelihood is that this moth has been assisted in its trip to Berkshire by the recent high winds, but Paul found it among heather heath at Snelsmore, raising the intriguing possibility that it could perhaps be resident there. 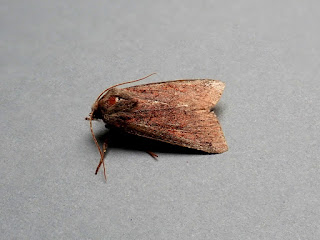 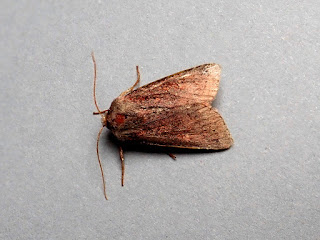 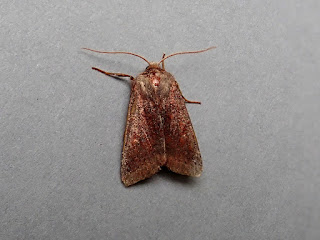