I would be grateful for any thoughts on my "Lost moths".

I have noticed, recently, the number of moths in my trap reducing and, for a couple of nights there have been none at all. I have the sort of trap that has two perspex sheets angled down into a box to let the moths in easily but make it difficult for them to get out.

I know moths are entering the box, albeit perhaps in reduced numbers. For example last night I had a look about 11:30 and there were several moths in the trap including a number of Thorns and large yellow underwings, but the trap was completely empty this morning.

The perspex sheets seemed to be a bit "Cloudy", so I gave them a clean but, on closer inspection, the sheets were slightly scored giving the cloudy appearance.  I wonder if this gave moths a purchase to escape but find it hard to believe all moths would get out this way and, in any case, how did this scoring occur? I have checked carefully and there are no gaps in the box construction that would allow all bar the smallest moths to get out.

There have been bats patrolling the area for as long as I can remember and, certainly, since I have been attracting moths with my trap, they will "hawk" and take flying moths, but I can't imagine them getting in and out of the trap and taking moths. If by some chance they did, there would be evidence, the occasional bat unable to escape again, bat droppings, moth wings etc.

I would be grateful for any thoughts on this problem. Perhaps just buy a different trap design!!

Photo of trap taken at 21:45 below following helpful advice from Dave and Nigel. (Thorn can be seen on inside edge; will it be there in the morning). 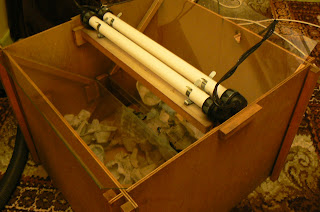