Migrants: As Martin reported last night, numbers of Diamond-back Moth were elevated last night though in tens rather than hundreds for me in my Didcot garden - trapping with Berks Moth Group at Wildmoor there were hundreds though. The garden trap also had a few Silver Y but pride of place was a Bedstraw Hawkmoth, Rather worn but beggars can't be choosers and its still a stunning moth. Although considerably less exciting looks wise, an equally if not more interesting record from night of 27th July in Didcot garden was a Saltern Ear (genitalia checked). 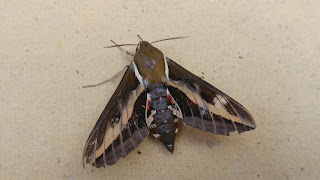 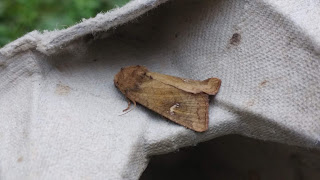 Expansion: As Martin also reported, Tree Lichen Beauty seems to be doing well and spreading more with at least two individuals a night for several nights now in garden in Didcot, having only had one or two total last year. And, having watched some odd looking large-ish moths flying round the site at CEH Wallingford in Crowmarsh Gifford I finally caught one and it was Gypsy Moth which also seems to be spreading and having a good year (several at Wildmoor last night as well). I put out an actinic trap over night at work and caught 8 males in an enclosed area where I had seen the males flying round and round some birch trees for three days in a row. I'm not sure of the status of Gypsy moth in the local area but these are the first I've seen or caught there. Marc Botham, Didcot 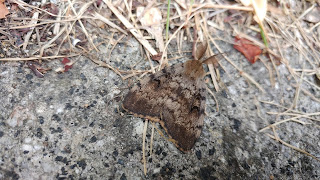