Two recent colonists and a few other species in the garden

Here are a couple of moths which the field guide says are colonists that have reached Bucks in the current decade.  Both have been mentioned in recent posts here, and both are new for my garden (albeit that this is only my second summer trapping).

The first is the Tree-lichen Beauty.  I'm familiar with it from France from where I've recently returned from three weeks in my wife's family home south of the Loire valley.  Back in Newton Longville (Bucks), I've had three in the trap in recent days; two were worn (one very much so), and generally dull and greyish, but even the least worn specimen was much less green than those that I see in France - for comparison I've added a rather foreshortened photo of a worn French specimen. 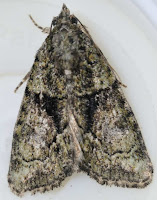 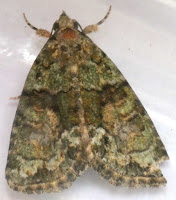 The second colonist I've caught recently was completely new to me.  I struggle to distinguish between some of the more common pugs, but I had no trouble with the two Cypress Pugs that turned up.  Unfortunately, I only managed to photograph the tatty one!  I see that the main larval foodplant is Monterey Cypress, but that it will eat Lawson and Leyland cypresses in captivity.  We have several Leyland cypress in the garden, so I can hope that it is breeding here.

Picking up a couple of other recent topics in this blog, I see that there has been some mention of second generation hawk-moths.  I had a Poplar Hawk-moth in the trap two nights ago, although it was looking a bit worn. 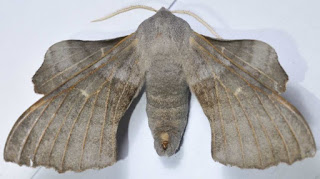 In respect of grass moths, Agriphila geniculea is in the lead in my garden (I had 77 two nights ago), with A. tristella not far behind (44), but neither of these come close to the 411 Chrysoteuchia culmella that turned up here on 10th July.  Crambus perlella has put in an appearance in low single digits, but I've not had A. latistria.

Finally, can I have some help with a set of moths that has stumped me?  I've had a significant number of similar-looking worn or extremely-worn moths, which resemble the sole decent-looking specimen below.  Note that the oval and kidney have darker outlines, not pale or black, and that this can be seen on all of the moths, even if on some individuals the other features are so worn as to be almost indiscernable.  The others have more of the dark colour between the oval and kidney: the specimen in the photo has only a bit.  Forewing length is 15-17mm.  I haven't managed to identify them and I have a feeling that I'm missing something obvious. 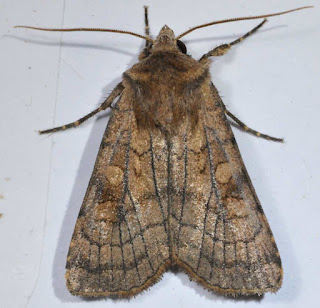