No FUN in Stoke Goldington (and trap thieves)

Attracted to actinic light, rather than pheromone lure, I think that the micro below is a perhaps a reasonable candidate for Grapholita funebrana. 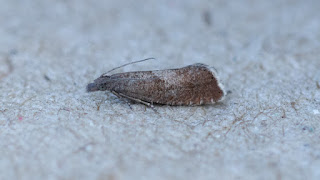 As an aside, I've puzzling over why so many of my trapped moths are ending up just as a set of wings on the bottom of the box, when apparently no wasps/hornets are about. This morning I discovered a wren, red-handed inside the Robinson trap (and trapped like the moths). I'm sure they can squeeze inside the Skinner trap too as the same happens to me with this, if it gets left too long without attention.
Has anyone else had experience with similar 'robbers' - I suspect the blue tits are at it too!
Posted by Keith Mitchell at 09:55