Dave reported that he had more than 100 species on the night of the 29th.  I didn't manage that many, but I still ended up with about 89 species.  I haven't run a trap for about three weeks - mainly as a result of being abroad for a fortnight - which meant that about about half of these were new-for-the season.  Having so many moths with which to re-familiarise myself (and to photograph) meant it took me a long time to work my way through the catch.

I have a few to check, of which I think the first is probably a Small Wainscot rather than a Concolorous.  It lacks the central dark streak that I have seen with previous Small Wainscots, but the outer ends of the veins are dark and I can find no examples of Concolorous like that.  I have added a photo that shows just a tiny bit of its hindwings, just in case.  I am clumsy and have a slight tremor, so getting it to show its hindwings was a struggle and both the moth and the human were getting a little fractious, so a photo taken with the moth in a pot and its wings only very slightly open is the best I could do. 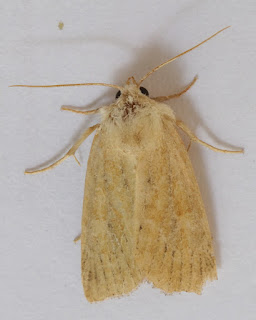 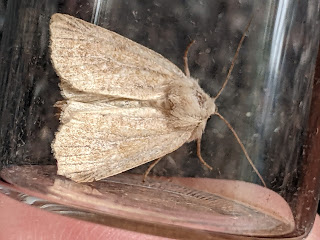 Next is what I think is a heavily-marked example of Oidaematophorus lithodactyla, the Dusky Plume.  The tibia of the mid-leg is thickened with scales as described in the field guide, but the brown banding above the joints on the hindleg is at best subtle.

My last moth for checking is at the opposite end of the scale of marking.  I originally wrote down Grey Birch, then I dallied with Engrailed, but after looking at the photo, I think the posture and general shape better fits (female) Willow Beauty or Mottled Beauty. 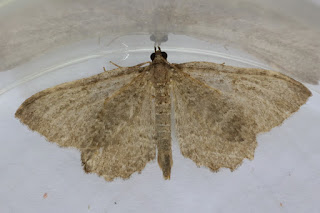 Finally, I reviewed the photos for my previous session of 6th June which I hadn't had time to label, and realised that Gypsonoma oppressana was a nice catch.  It came from the trap which I set directly between two Lombardy-style Black Poplars, so I hope it's resident in the garden.
Tim Arnold
Newton Longville, Bucks